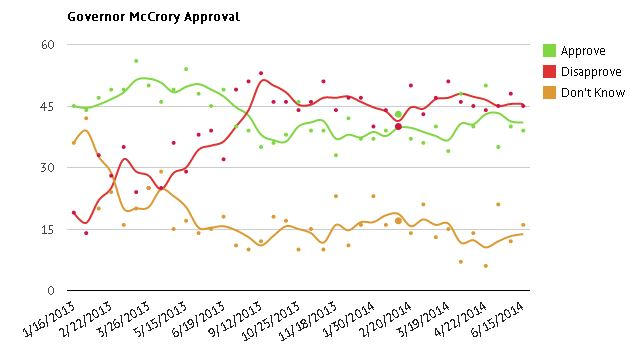 Governor McCrory currently leads in a potential 2016 re-election matchup against Attorney General Roy Cooper 44% to 38%, a 6 point advantage outside the poll’s 4-point margin of error.  30% definitely would vote for McCrory while 24% would definitely vote for Cooper.

Among those who approve of Governor McCrory’s job in office, he leads Cooper 77% to 14%.  Among those who disapprove of his performance, McCrory trails Cooper 13% to 73%.  Among the 14% who are currently undecided regarding the Governor’s performance, he leads Cooper in the likely matchup 31% to 15%, with 44% undecided on the potential 2016 ballot as well.