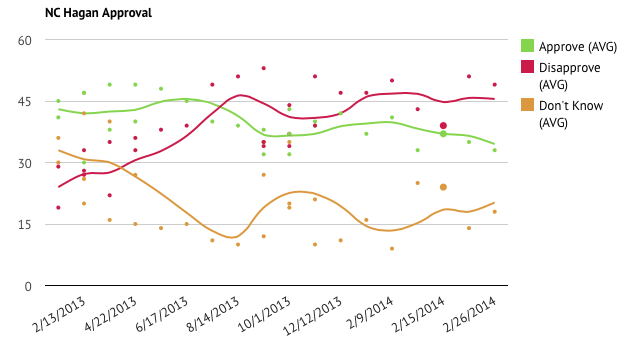 American Insights’ recent statewide poll of 611 North Carolina registered voters finds that N.C. Senator Kay Hagan slightly leads all potential match-ups with leading Republican challengers.  Hagan holds a 3 point lead on Thom Tillis, 38% to 35%.  She also holds a 4 point lead on Mark Harris, 39% to 35%, and a 2 point advantage over Greg Brannon, 38% to 36%.  Each of these leads is within the poll’s 4 point margin of error.

Hagan better solidifies her base against Harris and Brannon than she does against Tillis.  74% of Democrats support Senator Hagan in potential matchups with Mark Harris or Greg Brannon, but her support among Democrats drops slightly, to 70%, when facing Thom Tillis.

Younger voters, 18 to 34 years old, prefer Senator Hagan against all three potential GOP contenders, but Greg Brannon suffers the smallest deficit among this demographic.  Brannon trails Hagan by 3 points among 18 to 34 year olds, 34% to 37% for the Senator.  Thom Tillis is behind Hagan with younger voters by 9 points, 29% to 38%, and Mark Harris polls 12 points behind the incumbent, 29% to 41%, among the group.